It was my strong belief then and it remains the case now that, while some inner-city Brisbane residents may not immediately be conscious of our significant local environmental concerns, in fact, right there under our noses, is the Brisbane River connecting the Brisbane River catchment, which contains most of the green space in South-East Queensland, with the vitally important Moreton Bay. The Brisbane River, its catchment and Moreton Bay are without doubt our biggest and most significant local environmental assets. The river is also culturally important to our people. It is significant to our traditional owners of the land, and every day, subconsciously or consciously, it forms a backdrop to the lives of local residents going about their business. The Brisbane River and Moreton Bay, incidentally, are also economically important. Some estimates of the economic activity around the Moreton Bay and catchment rival the total economic activity and value of the Great Barrier Reef. But back to its environmental significance.

The Brisbane River catchment obviously contains most of South-East Queensland's fresh water. It links many of our important parks and forests, and it also contains most of our iconic and endemic species. Moreton Bay itself includes a Ramsar site of international significance for dozens of bird species, including some of those famous migratory species that Attenborough documentaries showcase travelling such tremendous distances all around the globe. It supports iconic and threatened species, including three species of large turtles, and it is also one of the top 10 habitats in Queensland for the dugong. I conclude that all of these factors mean that the Brisbane River and its catchment are a logical place for policymakers to start when we consider the priorities for our local environment and when we consider the opportunities and the strategies for protecting and growing the resilience of the local environment right across South-East Queensland.

Following my advocacy, informed as it was then by my work with Seqwater and my tree planting and catchment activities over many years, this government has committed over three-quarters of a million dollars to projects that will protect and improve the environmental condition of the Brisbane River and its catchment. The projects include $80,000 for water-smart street trees, rain gardens and other water-sensitive urban design to reduce stormwater and road run-off into the catchment; $70,000 to tackle sediment run-offs, specifically at Tenerife Park; $360,000—over a third of a million dollars—towards riparian planting and erosion control projects for tributaries into the Brisbane River, including around the Enoggera Creek; and $50,000 to support the waterways clean up program to directly remove litter from the river. The commitments also include a Green Army project, which will enhance the local Brisbane River riparian areas to improve water quality and species retention, to protect and improve habitat, working in conjunction with the other elements of the local plan, and looking at rejuvenating the local environment through the removal and the control of invasive species and replanting with native species. These projects, in conjunction with projects being delivered by others, such as the Brisbane City Council, have been prioritised and chosen in consultation with groups like SEQ Catchments and other catchment groups, and they should help to improve the environmental condition of the Brisbane River, in line with the priorities and the challenges and opportunities outlined in Healthy Waterways' annual report on the condition of our catchment areas all along South-East Queensland. 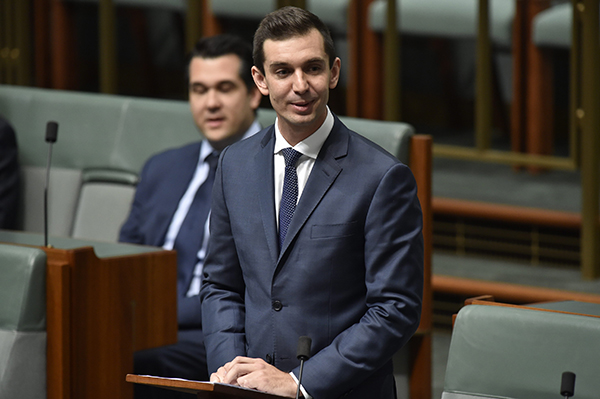 First of all, I am honoured to be joined by so many of my colleagues here in the chamber so late in the evening. I am sure it has more to do with the events of the last sitting week than any expectations that I will be eloquent or profound!

I first visited this parliament as a teenager on a family road trip. I remember my brothers running pretty much right across the roof of this place and rolling down the grassy slopes on the sides of the building in a way that security probably does not permit today. I don't remember being up there in the gallery, but my parents, who I am very proud to say are up there tonight, tell me that I was.

Between that visit and now, I have had many causes to reflect deeply on the achievements of our nation and our past governments. The sacrifice and the service of the men and women in this place have steered Australia through the challenges of 115 years of Federation, two world wars and countless moral trials and economic tribulations. I am humbled, but enthusiastic about having this opportunity to contribute my service to the betterment of our nation.

Australia is one of the longest continuously running democracies on earth. Our Federation was formed thoughtfully in peacetime and benefits from great foundations and traditions. We are a beacon of freedom, prosperity, diversity, justice and security in an often difficult world.

I see our nation, in some ways, as our sanctuary: an economic sanctuary, an environmental sanctuary and a sanctuary affording us safety from many of the events, illnesses and other miseries in the wider world. We should take very seriously the responsibility that comes with having the custodianship of both a nation and a continent.

I come to this place deeply connected to Australia's small business class. My family have been retailers and shopkeepers for generations, and also builders, farmers and sawmillers.

I was born in Tweed Heads in New South Wales. I was the first of my family to attend university. Before that, I am proud to have attended government schools in Mitcham, Victoria; in Elimbah near Caboolture; and in Beerwah on the Sunshine Coast.

I believe the last federal MP to be born in Tweed Heads was Neville Bonner, Australia's first Indigenous politician. He was a great Queensland politician and a constitutional conservative. I have admired his principled approach, along with how gracefully he represented the diversity of our country, as a proud Liberal. I hope to say more about Neville Bonner in the future. In the meantime, I hope I can emulate his style.

Read more
Share
Have Your Say Your opinion matters. Click here to take our latest community survey. Volunteer Be part of something great. Get involved by joining Trevor’s team. Donate Show your support and make a real difference in the future of Brisbane.